Last month, we reported that Blackberry’s 7 inch tablet device had been slashed in price, down from £399 to just £169.

This nifty little tablet is still on offer at that massively reduced price, and has just got even more attractive thanks to a free software upgrade.

Rather than running the Apple iOS system, or using the increasingly popular Android OS, this uses Blackberry’s own interface and software, although as we’ll explain in a bit, the updated Playbook can now run Android apps too. Here’s the highlights of the Playbook Proposition: 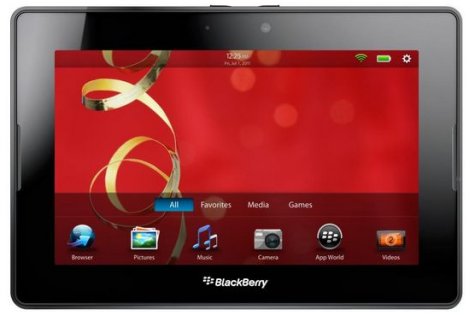 The Blackberry Playbook, at a knock-down price

On Tuesday the 21st of February, a free upgrade to version 2 of the tablet’s operating system was launched. Here’s a summary of what’s new:

The addition of support for Android apps is huge, and could make all the difference for the Playbook, although it’s important to note that not all Android apps are available. Developers have to make some tweaks to get the apps to run, and the Playbook-ised apps need to be approved by RIM before the can be added to the Blackberry App Store. Expect to see a large amount of new apps on their way now that OS2 is out.

If like the sound of the Playbook , then they’re still around at this awesome price – The 16GB is in stock online at Currys at the time of writing: Blackberry Playbook 16GB at Currys

This website uses cookies to improve your experience while you navigate through the website. Out of these, the cookies that are categorized as necessary are stored on your browser as they are essential for the working of basic functionalities of the website. We also use third-party cookies that help us analyze and understand how you use this website. These cookies will be stored in your browser only with your consent. You also have the option to opt-out of these cookies. But opting out of some of these cookies may affect your browsing experience.
Necessary Always Enabled
Necessary cookies are absolutely essential for the website to function properly. These cookies ensure basic functionalities and security features of the website, anonymously.
Functional
Functional cookies help to perform certain functionalities like sharing the content of the website on social media platforms, collect feedbacks, and other third-party features.
Performance
Performance cookies are used to understand and analyze the key performance indexes of the website which helps in delivering a better user experience for the visitors.
Analytics
Analytical cookies are used to understand how visitors interact with the website. These cookies help provide information on metrics the number of visitors, bounce rate, traffic source, etc.
Advertisement
Advertisement cookies are used to provide visitors with relevant ads and marketing campaigns. These cookies track visitors across websites and collect information to provide customized ads.
Others
Other uncategorized cookies are those that are being analyzed and have not been classified into a category as yet.
SAVE & ACCEPT
Powered by