Fancy the idea of getting Siri on your mobile phone, but don’t have an iPhone 4S? Well, move over Siri, as Evi is here, and she runs on a much wider range of smartphones and tablets.

Evi, created by developers True Knowledge, is a credible rival to the voice recognition service for iOS, known as Siri. Evi, with her cyclops single-eye icon, makes good use of the microphone on many smartphones to listen to commands, send them over-the-air for processing, and returning text.

We’ve been testing Evi here on a Samsung Galaxy Tab tablet computer as well as on an HTC Desire smartphone, and although a little slow, it’s still pretty usable, and returns some sensible answers. You can also say a few silly phrases to Evi, for some largely amusing answers. Whilst we’re not saying that this rivals Siri for speed or slickness, it’s an app worth trying, and it has the advantage of being a freebie.

Also, don’t expect the smooth integration with Android that you get with Siri. You won’t be able to get Evi to send a text message, or add an entry to your diary – It’s limited to performing online searches – although in a rather stylish way, without Siri’s “here’s a webpage” cop-out.

If you want to give Evi a test run, download her from the Android Marketplace. Here’s a shot of Evi in action: 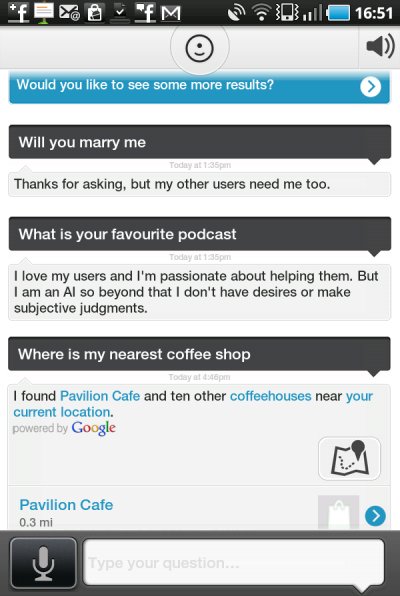 Screenshot of Evi on a Samsung Galaxy Tab

Yes! Evi is also available for Apple devices, and currently has the advantage for those of us in the UK in that it: a) supports UK business lookup (e.g. “Find my nearest coffee shop”), and b) has a female voice, rather than the male voice us in Britain get by default.

Although free on the Android platform, the developers have opted to make Evi a paid app for the iPhone, iPad and iPod Touch – however at a measly 69p, it’s hardly going to break the bank. Download Evi from iTunes

We’ll continue playing with what appears to be the best rival to Siri, and report back if we uncover anything interesting.